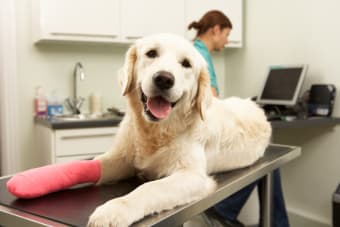 If your dog is suffering from a torn CCL, our White Settlement vets may recommend TPLO surgery to repair the injury and help return your dog to an active lifestyle.

Why is my vet recommending TPLO surgery for my dog?

What is the CCL?

Because a dog's hind legs are always bent, unlike humans, the CCL is always a load-bearing ligament. When the CCL is torn, your dog's knee becomes unstable and painful.

Symptoms of a CCL Injury

CCL injury symptoms in dogs can appear suddenly, but they usually develop over time. The following are the most common symptoms of a CCL injury:

Continued activity on a mildly injured CCL will aggravate the injury and exacerbate the symptoms.

Approximately 60% of dogs who have a CCL injury in one leg will injure the other shortly after.

TPLO surgery, rather than replacing the CCL with an artificial ligament through an Extracapsular Repair, reconfigures the knee to eliminate the need for the CCL ligament entirely.

TPLO surgery entails making a curved cut from the front to the back of the tibia, then rotating the tibial plateau (top section of the tibia) backward until the tibia and femur angles are level. The two sections of the tibia are then stabilized in the desired positions with a metal plate while the bone heals in its new configuration.

Approximately 6 months after surgery, your dog should be able to resume full physical activity, including running and jumping.

Note: The advice provided in this post is intended for informational purposes and does not constitute medical advice regarding pets. For an accurate diagnosis of your pet's condition, please make an appointment with your vet.

To find out more about TPLO surgery to repair your dog's CCL, contact our White Settlement vets today.

We Are Always Welcoming New Patients

Our White Settlement veterinary team treats your pets as if they were our own. Book your first appointment today and join the Frontier Veterinary Hospital family.